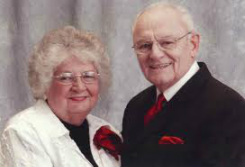 Dr. Paul & Mrs. Shirley Fedena
Dr. & Mrs. Fedena have been ministering the Gospel of our Savior for 48 years.  Out of those 48 years Dr. Fedena has been pastoring for 43 years.  He has pastored in New York, Maryland and for 31 years pastored the Faith Baptist Church in Fairless Hills, PA, northeast of Philadelphia.

Since “retiring” in 2002 he has been preaching in various churches around the country nearly every weekend and doing three and four day conferences as well.  He has preached Missions Conferences, Creation Conferences, Revivals, Bible Conferences and Prophecy Meetings (very popular and timely).  He has also taught each week in the Bible Institute at the Solid Rock Baptist Church in Berlin, NJ for 10 years, and continues to do so.

Dr. & Mrs. Fedena have been married 48 years and have served the Lord together from the beginning of their relationship.  They “courted” through the mail while Dr. Fedena was in the Army in Germany.  Then when he arrived back in the states they dated for about a year before marrying on January 30th 1960.  The Fedenas had four children:  Crystal, Dawn, Daniel and Dean (deceased), and have 11 grandchildren and one great grandchild.

From his first part-time church in Walton, NY while he was in Seminary in Binghampton, NY, God has singly blessed his preaching and teaching ministry.  After graduation he became the full-time pastor of the Calvary Baptist Church in DeRuyter, NY (a summer resort community).   Then he moved on to Glen Burnie, MD and the Calvary Baptist Church there.  His ministry there grew wonderfully in the seven plus years.  It was there he first started a bus ministry.

Then God called the Fedenas to Fairless Hills, PA.  The first Sunday there were 42 people in attendance and Dr. Fedena asked God to save at least one person in his first service as pastor in what was then a Calvinistic church where no one had walked the aisle in the seven previous years – for any reason.   That first Sunday a man sitting in the back row raised his hand for salvation and trusted the Lord as his Savior.  That was the beginning of a virtual army of souls trusting Christ over the next 31 years.


Faith Baptist began a bus ministry, a soul-winning ministry, a deaf ministry, a youth ministry, a kindergarten, primary and Junior Church ministry, a ministry to the handicapped, a printing ministry, a tape ministry, etc. under Dr. Fedena’s leadership.  The church grew from 42 people to a high day of 1232.  For years the church averaged about 500-600 each Sunday morning and 250 to 325 on Sunday and Wednesday nights.  (God is so good!!!!)  Dr. Fedena also led in the building of a Bus Garage, a gymnasium with classrooms and an auditorium seating over 600, as well a major auditorium renovation.


There was hardly a Sunday when someone didn’t get saved in one of the services.  For most weeks there were baptisms as well.


Dr. Fedena believed in an expository approach to the preaching ministry and that became a stead diet for the people of Faith Baptist.  Of course he also preached topical and textual sermons as well, but was nearly always in a verse-by-verse exposition of a book of the Bible.  These sermons were not simply comments on verses, but fully outlined messages that could stand alone as well as in the context of the book of the Bible. Pastor Fedena is a strong believer in visuals and presently uses Powerpoint extensively.


The Fedenas want to stay busy for the Lord until called home by the undertaker or the Uppertaker.  They love ministering in various churches and try to be a help to the pastors and people.  Shirley is an excellent pianist and organist (and my chaufferette).  Call us if you are interested in having us in YOUR church.